Adventures in Braising I 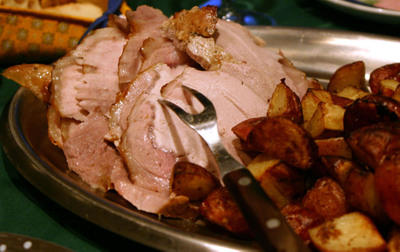 In general, I’m not a meat eater. I am not really a strict vegetarian either, but I don’t care for most meat and I adore vegetables, so that’s what I eat, and mostly, that’s what I cook.

Still, given that I won’t eat them, I’m really having trouble accounting for my current obsession with braising huge hunks of meat. I braise vegetables too, of course, but they are not transformed by slow moist heat in quite the same dramatic fashion that meat is. I love the idea that you can season a leg of lamb, sizzle it to a crusty brown in some butter, throw it in a heavy pot with a little broth and wine, shove the whole thing in the oven, and several hours later, voila. The meat is tender and falling off the bone, the sauce is rich and thickened, and the whole house smells fabulous all the while. Magic.

I’ve gotten fairly proficient at braising lamb since the obsession took hold. My favorite recipe, from Joanne Weir’s More Cooking in the Wine Country, involves 18 small artichokes and 40 cloves of garlic, as well as lemon juice, chicken broth, some Sauvignon Blanc and fresh thyme. I am totally addicted to the sauce that emerges from this braise. While meat doesn’t do it for me, I am a sauce and gravy junky, (I know, I know, you can’t have one without the other. I’m just explaining, not justifying) and this is one spectacular sauce with the garlic just melted into the winy juices and the artichoke hearts caramelized and sweet.

I decided I was okay with eating the lamb sauce after talking to Rebekah Fiedler, of Fiedler Family Farms, one Saturday at Market. She had packed up a leg of lamb for me, and started to tell me a little bit about the animal it came from. I said, “Gee, Rebekah, can’t you just pretend you found this leg, all wrapped up in freezer paper, just laying out in the middle of a field?”

She laughed but said, “Listen, my lambs have a fabulous life. If it weren’t for our farm, they wouldn’t be born at all. They live in a great place, they romp and play and eat well. They just have one really bad day, is all.”

We should all be so lucky, I thought. I take care to buy almost all of my meat from Rebekah of the happy farm, and other local farmers like her.

So lamb I’ve got down, but my current braising challenge is pork loin. After I bought a roast at market one Saturday morning (from Rebekah, natch) my friend Pat suggested I try a favorite recipe of his from Marcella Hazan – pork loin roasted in milk. Don’t know why it intrigued me – must have been the way he described the sauce (there’s that gravy thing again.) The milk curdles and gets intense and caramelized and mixed up with the crunchy bits of fat that are left after the roast is cooked – not attractive, but savory and delicious. I was hooked.

I’ve tried it twice now, using a hybrid recipe from Hazan and Bruce Aidells and Molly Stevens (who I learned about from the amazing Orangette), with a few added touches from Biggles at Meathenge and Kate at the Accidental Hedonist, whose extensive blogging on this recipe has been invaluable.

Basically I rub the roast with finely chopped sage, lemon zest, salt and garlic and let it sit for several hours in the fridge. Then I brown it in butter and oil, take it out of the pan, add 2 cups of whole milk from Traders Point Creamery and 10 cloves of garlic, bring it to a simmer, put the roast back in and pop the lid on the pan. Into the oven at 275 degrees for a couple of hours until the meat hits 145 degrees, then out. Midway I flip the roast over and loosen the lid to help the liquid evaporate. I have had to finish the sauce on the stove both times, letting the milk cook down to the desired curdy state. It hasn’t quite gotten that crunchy, browned stuff in it that Pat talked about and I think I must be using too much milk. Plus, he does his on top of the stove and I have done mine in the oven, reducing the amount of crusty bits on the bottom.

Still, the sauce is always as advertised -- intense, delicious and really , really ugly. I eat it on twice roasted potatoes that are crispy on the outside and creamy on the inside. Everyone else eats it on pork. They seem happy, and the meat is juicy enough, but because it’s a loin it’s still closer to a grilled pork chop in texture than to falling-apart lamb. It’s the nature of the beast, I guess.

I might try next time with a fattier cut of pork, as Aidells and Meathenge suggest, just to see if I can get it closer to disintegratingly tender. I don’t think the sauce can be improved on though. Don’t know why salty curdled milk should be so good, but there it is. It’s wonderful. Give it a try.

I use my tagine for meals like this. I have it in the oven right now with chicken and onions and lots of Middle Eastern spices. It falls off the bone and you'd be very happy with the very tasty sauce you can scoop out of the bottom. Oh yeah, those potatoes in the picture have me drooling. I'm a potato addict.

Wow. What a great picture!

I swear that beautiful photo of lashings of meat slices, just whispered to me : 'i'm here baby, take me'. You can tell i'm such a carnivore! Though saying that, i could easily live on veg for a week too. As you can see, there is a balance :-)

I find using shoulders of pork best for braising and roasting and the belly of course, which is my favourite part for its meat-fat balance. You get that juicy, soft and tender meat from it and as a bonus, CRACKLING [if you're roasting] that we all fight for a piece of.

Holy moly! For someone who leans towards a vegetably point of view, that's one hell of a roast. Congrats!
And yer right, it's all about the gravy. Wanna do a face plant in the gravy boat? Do a dollup or 2 of creme fraiche in your pan sauce and simmer for a moment. YUP.

As far as the meat goes, yeah the pork loin is really too lean, I believe, for this recipe. What you're looking for is the hunk that's between the loin and the butt/picnic. It's the cut where you get "country style" pork ribs from. My milk braised pork fell to pieces under the weight of the knife, gloonk. Man that was some crazy good food.

hi christine, i can totally identify with your need to braise; there's something immensely soul-satisfying and honest about the process and the food it produces - what a delicious number yours looks like!

I love the "one really bad day" quote. In any case, this sounds delish--I can't wait to try it. I've heard of slow simmering pork in milk in place of a pot of melted lard for carnitas, and this sounds very similar in technique.