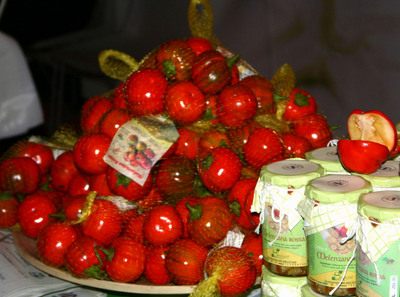 Sorry for the long silence – turns out it’s hard to blog with your mouth full.

We’ve eaten some fabulous food in the last few days – but it has been far more than food that just tastes good. Long, leisurely meals of traditional Piemontese fare, shared with very good friends, a couple of whom I’ve known since I was 15! It’s been Slow Food at its very best.

In the end, though, it will be far easier to digest the rich and delicious food than all the implications of this Slow Food conference. When I get back home I will do some Q & As with the farmers and chefs we sent from Bloomington about their  experiences here, and I will blog in detail about some of our finer food moments.

For now, here are some quick snapshots.

There was a total crush of people at this year’s Salone. In the past we were able to stroll around, tasting food and learning about various products and techniques of food production. This time it was a struggle to battle the crowds. I haven’t found estimates of the total attendance but one press release said that 24,000 people attended on the opening day. I got here later but I believe it. By yesterday, however, things were slowing down and I got a chance to talk to some producers and see what they are doing.

Anecdotal evidence suggests that it is not just Italians turning out but people from all over. Slow Food says they will have outgrown the Lingotto for the 2008 Salone and are working with the Turinese government to find a larger venue. This movement is going mainstream in a big way. Wonder if that means the world is getting slower or the movement is getting faster?

The Slow Food project is so impressive. About 300 endangered foods or food traditions stand a chance for survival thanks to being designated as presidia by Slow Food, which then lends them its support and protection. I think many of these foods were represented at the Salone (although some were missing, like the US raw milk cheese presidium, which didn’t make it through customs.)

Here are just a few of the “protected” foods I tasted: buttery, toothsome Sorana Beans from Tuscany; hearty Ur-paarl bread, full of fennel, from the upper Val Venosta; the Bronte pistachio from Sicily, more expensive but also more delicious than the more common version of the nut; the rosy, green striped Rotonda eggplant from Basilicata, preserved in oil (see picture above): the Alcamo Purceddu Melon, yellow and sweet, from Palermo; Oscypek, a smoked sheeps cheese from the Tatra Mountains in Poland; sharp artisan cheddar from Somerset, England; chewy nutty einkorn (petit epeautre) from the Haute-Provence in France; Perlardon Sec, the aged version of one of my favorite cheeses, from Languedoc-Rousillon; and Irish raw milk cheeses.

There were many more kinds of cheeses and cured meats and dried fish and unusual fruits and vegetables – like red garlic (yes, red), hunchback cardoons (like an artichoke without the thistle head), and rare olives… oh my, the olives!

The presidia foods from our hemisphere were remarkably different from the European foods: Andean corn and potatoes, several different kinds of nuts, coffee, cocoa, spices. From the US, only the Anishinaabeg Manoomin (a kind of wild rice grown by native Americans in Minnesota) was physically present, but other US presidia  foods include the lost cheeses, the Cape May oyster  the Navajo-Churro Sheep, and the Sonoma County Gravenstein Apple. 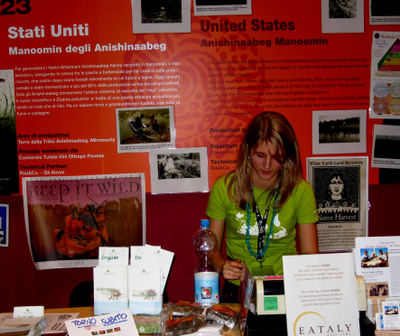 I need to think a little bit more about if this is in fact true and if so, why, but it seemed to me as I walked through the halls that the old world presidia were much more likely to be based on traditional methods of raising or processing food (cheese or salami making, for instance) as much as the raw materials of the foods themselves while the new world foods seemed to be more likely to be the raw materials – specialty kinds of plants or animals that are in danger of extinction.

The presidia booths were located all around the center of the convention area. The middle was filled with vendors of amazing food products that were for tasting and buying – not protected foods but artisan produced cheeses, meats, vinegars and oils, conserves, candies, cakes, liqueurs, pastas, gelatos, you name it. There were 700 booths all told, so that gives you an idea. Let me just say that we brought an extra suitcase, and it is already full.

My big plans for blog posting seem to have been overly optimistic. We are heading out of internet range tomorrow and home soon. When we get back I’ll catch up with some of our side travels and meals and with the Terra Madre event here in Torino.

H204 students, here's something to think about.  We read a lot about interest groups in Nestle's book -- largely groups representing the food industry.  Slow Food is an interest group too.  How does it compare to the kinds of groups we talked about in class?  Can it fight the kind of power that the corporate groups have? 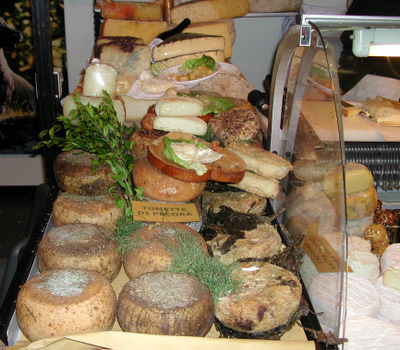 Not too much cooking in my house lately as we are scrambling to get ourselves ready to get out of town next week. This trip has been in the works for a while and while we have put off most of our travel this year to nurse our sick dog (yes, Zoë is still with us for now, and many thanks to those of you who have sent good wishes) this is business as well as fun and we have got to go.  (The sacrifices we make!)

Our destination is the 2006 Salone del Gusto (Hall of Taste), a biennial Slow Food event held in a beautifully renovated Fiat factory on the outskirts of Torino, Italy.  Slow Food, in case you don’t know, is an international organization, founded by Italian Carlo Petrini in 1989 to push back against the tidal wave of fast food culture sweeping the globe. Slow Food supports native food producers and traditions and emphasizes the satisfaction that can come from eating regionally, leisurely, and sociably. There are now more than 80,000 Slow Food members in more than 45 countries around the world including the U.S.  They are organized into more than 850 local chapters -- called convivia -- including one here in Bloomington, of which Dave Tallent and I are co-directors.

The main project of Slow Food (besides creating opportunities for outstanding, convivial eating) is to identify foods that are in danger of being lost to the Fast Food juggernaut — exceptional regional foods produced by artisans on a small scale that cannot compete with mass production techniques but which have a long and delicious heritage worth preserving. Movement members work to add these foods to the Slow Food Ark of Taste — a roster of foods in need of rescue which now includes all manner of cheeses, fruits and vegetables, honeys and preserves, meats and fish. Grassroots efforts promote, subsidize and defend these Ark foods  -- working to get them onto restaurant menus, household shopping lists and local political agendas to help ensure their survival.

The Salone is Slow Food’s signature event. We went in both 2002 and 2004 and I am still at a loss for words to describe it. For a food lover, it may be the most fun you can have. Part food fest, part trade show, part ideological showcase for the merits of biodiversity and ecological awareness, the Salone is an exposition of everything Slow. Artisans and producers come from all over the globe (although for logistical reasons, Europe in general and Italy in particular are best represented) to display their wares, offer tastes, conduct workshops, and discuss the difficulties and challenges of being a small scale producer of exquisite food in a mass-production world. The giant convention hall is organized with international foods in one section, Italian in another.
Here’s what I wrote when we came back in 2002: 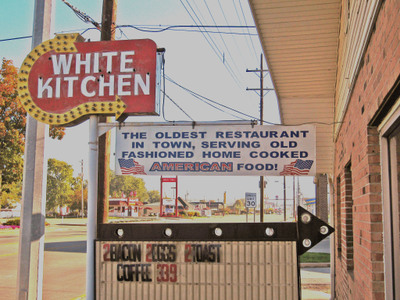 This weekend my mother in law, Doris, turned 91, and we drove over to St. Louis where she had flown in from Portland to celebrate with her two younger sisters (they are 86 and 89.) The three of them were like giddy girls –just a hoot. I want some of those genes!

Dinner was great – Aunt Helen made a chicken casserole and one of those salads I love with vegetables and bacon all layered in with mayonnaise and sugar and chilled over night before being mixed up into creamy and extremely calorie-laden goodness. I made the mistake of getting the recipe – very good for the purposes of making it again but very bad from the perspective of trying to maintain some plausible deniability about what it is likely to do to my arteries.

She also made a fabulous apple walnut cake – dense and moist and not too sweet. I got that recipe too. Check it out at the end of this post.

We only stayed for dinner, and headed back last night, staying at a hotel on the road and getting home this morning. Now, these days when we drive we skip the interstates when at all possible – less stressful and noisy and more likely to produce a culinary adventure along the way. So this morning found us zipping along Highway 50 from southern Illinois to Indiana, looking  for somewhere for breakfast.

I knew exactly the place I was looking for -- a mom and pop place with formica tables serving piping hot coffee and biscuits with sausage gravy and scrambled eggs and home fries and crispy bacon and hot, buttery toast. I could practically taste it.