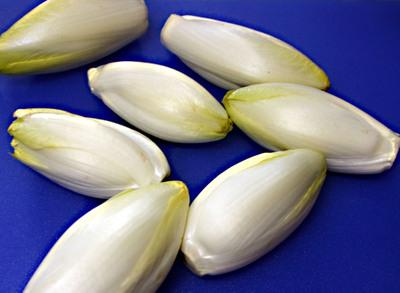 Thanks to everyone who has sent nice notes about my mom. She’s doing better than we thought – they downgraded (upgraded?) her diagnosis from Stage III to Stage I lung cancer (for those of you fortunate enough not to be fluent in cancer-speak, this is a good thing) and we are hopeful that surgery can take care of it. So keep sending her good thoughts and, if you smoke, quit, damn it!

Meanwhile, I am suffering from a surfeit of comfort food (who knew you could have too much) and looking for a healthier path to tread. Nothing extreme, I just don’t want to feel like a slug. Lo and behold, the answer was in yesterday’s New York Times. I have decided to go on the Michael Pollan diet.

Pollan, in case you don’t know, is the author of the best book I read last year -– The Omnivore’s Dilemma -- a thoughtful, provocative exploration of the sources of our food. He had a piece in the New York Times Magazine called “Unhappy Meals,” where he basically sums up a semester’s worth of my food and politics class in 10,000 words. (I’m linking to it here -– you may need to register to read it but it’s free. After about 7 days they will probably archive it and then you have to pay. It’s worth it.)

Essentially Pollan says we have forgotten how to eat because we have been led astray by the myopia of our science and the greed of our politicians. We need to learn to eat the way we used to. In his words: “Eat food. Not too much. Mostly plants.”

Wait, it gets better. Really. At the end of the 10,000 words he elaborates on this with nine “rules of thumb:"

1. Eat food, by which he means whole foods our great-great-grandmothers would have recognized as food. No Go-Gurt. No pop tarts. No diet colas. No highly processed and refined anything, no matter how many vitamins and nutrients have been added back in.

2. Avoid foods that make grandiose claims about how good they are for us. The best foods don’t brag (or, in his words, don’t miss the silence of the yams.)

4. Shop at farmers markets when you can. The food is better quality, and less processed.

5. “Pay more, eat less.” Everyone knows that eating less is better than eating more, it’s just that the food lobbies stop the government from telling us so since it will hurt their pocketbooks. Screw the food lobbies. Enjoy smaller amounts of higher quality (organic!) foods and feel better.

6. Eat mostly plants, especially leaves. Treat meat as a side dish, or a flavoring.

7. “Eat more like the French. Or the Japanese. Or the Italians. Or the Greeks. Confounding factors aside, people who eat according to the rules of a traditional culture are generally healthier than we are. Any traditional diet will do: if it weren’t a healthy diet, the people who follow it wouldn’t still be around.”

9. Eat like an omnivore. Add more species to your diet – right now 2/3 of the human diet comes from corn, soybeans, wheat and rice and that is not nutritionally diverse enough to sustain health. (I know, I know, you big meat eaters don’t think that’s true, but as molecular analysis will reveal, most of the beef you eat is just processed corn.)

So… Not too taxing, not too scary. I’ve been doing some of those things anyway. I don’t really eat meat, I eat a lot of vegetables, and I love leaves. (This article told me what that’s called, by the way – turns out I am a flexitarian.) But I’ve been eating way too much cheese and butter lately and my record with processed and refined foods is sad.

Hence, endives for lunch! I love endives, but since they aren’t made from white flour I haven’t seen them in my fridge lately. I braised these – cut them in half, seared them in (a little bit of) butter, drizzled some broth on them, salted and peppered, scattered a handful of chopped kalamata olives over the top and dotted them with goat cheese (I used a Capriole Farms Piper’s Pyramide I got at the Winter Market on Saturday though feta is also good on this.) Covered the dish with foil and baked for 40 minutes at 350. Ate it hot for lunch with crusty bread and snacked on it cold a couple of hours later. Both were excellent. 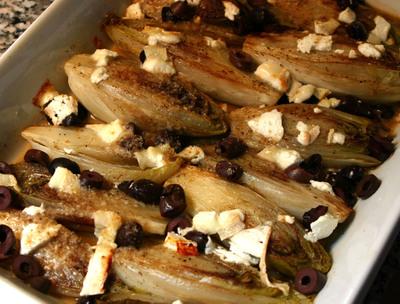 Hooray for Michael Pollan! I am currently in the process of making every member of my immediate family read the Omnivore's Dilemma. It changed me, and I can only hope it changes them too. Glad to hear your Mom is doing better.

I loved this piece in the Times magazine, too. Reading The Omnivore's Dilemma didn't change my life, but it made me think hard and either justify my eating decisions, or accept that they were indefensible! Should be required reading for everyone.

Sounds like Pollan is elucidating some sound basic ideas that benefit everyone. Thanks for sharing.
I am definitely making this endive recipe--it looks delicious!
P.S. I wish your mother, you, and your family well.

I have been looking for the "new diet" or eating program as I like to call it, since I set my goals for the new year and this sounds perfect. The only problem is that I am sitting here in my cozy library enjoying this post with a can of diet coke by my side!
Ronnie

That is really great news about your mom.

Cheers to healthier eating as well!

Sara - try getting them to read the article. It's shorter.

Exactly, Lydia. Reading Pollan made me realize that every food dollar I spend is a vote for a way of life. Makes me think twice (though it doesn't always stop me.)

Sorry to hear about your mom, but I am glad it's a little more hopeful. This book is on the pile of books I don't have time to read! (I confess, I drink diet Coke a lot more than water.)

Great thoughts. Pollan is spot on. I started following much of his advice and also began walking every day. I've never felt better and I've dropped 35 pounds! Eat good food but less of it and move more. That's the only health plan we need.

Pollan must type at some freakish and inhuman speed, considering the length of nearly everything he publishes. Love his summary, especially the part about eating only what your great-grandmother would recognize as food. Another easy way to do this is to shop only the perimeter of the grocery store, where the veggies and meats and "natural" stuff is. Once you venture down the aisles, seems like it's nothing but boxed and refined corn-based products. Go-gurt scares me. Sorry life ganged up on you - glad you've started to come into the light at the end of the tunnel.

Very interesting post. I´ve been fairly into Ayurveda recently, the ancient Indian science of well being and it´s amazing how similar it is to Pllan´s advice. Particularly on Red meat and veggies!

Hope your mommy feels better soon. I´m in Peru nursing my mum in law who has liver cirhossis and lukaemia.

It's worth getting to Kalyn, when you have the time. Won't stop you drinking diet coke, though, if I am anything to go by.

Good for you, Scott! You must feel great.

I'd heard the same thing about shopping the perimeter of the grocery store, Jared, but I hadn't paid attention. Walked a lap round my local store yesterday after reading your comment and you are exactly right.

Thanks, Malika. Hope things for well for your m-i-l.

I was happy to read that article a couple of weeks ago and realize, Hey, that's how I've been working on eating for two years now! It's great to feel validated.

I love the way he talked about food-like products that aren't really food at the beginning of the article. It had me cracking up.

I've been hearing more and more about Pollen's book and article in the NY Times. The endives look yummy.

One more thing. I just checked out his book at our library b/c of this post -- my main problem is coming up with a menu for the week that would comply with his suggestions as well as not turn into a second job. Cooking well and making sure you are eating healthy with all there is out there in "processed food" land takes a lot of time, AND money.

I would totally buy a book of recipes that could take both perspectives into account: good recipes for an omnivore that fit a budget and a reasonable schedule. Does that make sense? Is someone out there trying to apply Pollen's concept to daily living? I'd be curious to hear what you think.

I don't know of anyone who has adapted an actual diet to Pollan's ideas, Charmaine. I know how hard and time consuming it is to eat a healthy and humane diet. I just try to make more good choices than bad ones, always knowing that there will be busy days when I head to the Taco Bell drive through. But I join a CSA in the summer, shop at farmers markets whenever I can and buy organic at the grocery store when I can't. It's a work in progress for me -- some days I do better than others.

these look so flavor packed! thanks for sharing. yum-my!