Catching Up and Taking Off 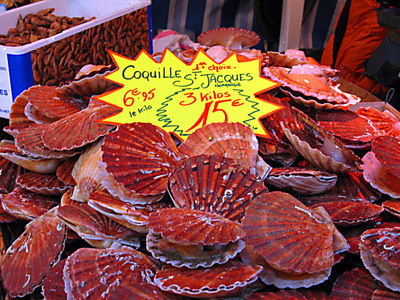 I’ve had a couple of things in mind to write about but we are leaving for Paris this evening and time is tight, so I’ll jam them into a single (long) post.

Tonight we head to Paris for our annual Valentine’s Day visit. Usually we go for a weekend, but schedules allowed a week this time. It’s going to be warmer than here, but wet, so I guess we’ll spend most of our time indoors and eating. What a chore.

Normally I go with restaurant reservations in hand, but this time I haven’t a one. I know we’ll head to the rue de Rossiers to our favorite falafel place. I know we'll do some heavy duty macaroon eating. I know we will go to a tiny dive of an Italian restaurant we love where the pizza is fabulous. I know we’ll have at least one picnic in the room, where we shop at a morning market and spread the bounty on the bed for a feast of bread and cheese, meats and salads, olives and wine and spectacular patisserie desserts. (The only downside is sleeping in crumbs – somehow they always find their way in.)

But aside from that, we are playing it by ear. We have lots of favorite places near the hotel we always stay at, but this time we are staying somewhere else and we’ll check out the new neighborhood (right next door to the old one) and see what looks good. Hope to post from there, but we’ll see how the internet connection goes.

An unexpected bonus of middle age has been reconnecting with an old high school friend and finding out that we have more in common now than we did then. Ronnie is writing a cookbook about food memories and family traditions, and she has started a blog to share the stories she is collecting, and to encourage some more participation in the project. Visit her at http://aroundthetable.typepad.com and say hello.

Last summer I was on a braising kick – trying to perfect the art of braising pork roast in milk. Never got it exactly right but the learning’s been fun (and I’m not done yet.) Meanwhile, on my list of things to try has been Seven Hour Lamb – leg of lamb cooked at a very low temperature for, yes, seven hours until the meat just falls off the bone – rosy pink and totally tender.

Saturday I had folks coming over for dinner and with the opening of our winter market the week before, access to great drug-free, grass-raised, happy, healthy meat from the Royer and Fiedler Farms. I bought two legs of lamb (one from each farm) –- one bone in, one boneless -- and braised them together (adding the boneless two hours after the braise started.)

I combined a couple of recipes, but the whole thing couldn’t have been simpler. As per Paula Wolfert, I boiled the meat for 15 minutes before I browned it. She says this helps ensure that there is no surface bacteria to spoil the meat as it cooks at low temperatures. I have no idea if it’s necessary, but it surely didn’t hurt.

Once the meat was boiled (and looking a pretty ugly pasty gray) I salted and peppered it and seared it in olive oil til it turned a crusty, yummy-smelling brown on all sides. Removed the meat and sautéed a couple of onions, chopped, in the oil until they caramelized. Added a cup of dry white wine and scraped up all the bits that stuck to the pan, cooked the wine down by half. Added the meat back to the onions in the dutch oven and poured in a cup of chicken broth, a cup of canned diced tomatoes with their juice, and a teaspoon or two of dried thyme. Added 50 cloves of garlic (no panic – they cook to a mellow sweetness in seven hours!) and brought the whole thing back to a simmer. Stuck a piece of cooking parchment on top of the lamb, but overlapping the sides of the pot, clamped it down with the lid, and put the whole thing in a 200 degree oven where it spent the day.

Occasionally I turned the lamb (I added the second browned leg at the two-hour mark) and I did end up cranking up the heat to a wild 250, just to get it to maintain a low simmer, but that’s about it. I didn’t want the meat to boil in a ton of liquid, so as the meat shrank a bit and the juices increased, I ladled some of the broth off and let it simmer in a separate pan. At the end I removed all the meat (which just totally fell apart), cooked the sauce down til it was thick and gravy-like and served it to happy guests.

Side dishes were the braised endives from last week, but prepared faithfully according to Molly Stevens' recipe this time, which means halved endives are seared in butter on both sides and laid cut side up in a baking dish, chopped up prosciutto is quickly slicked in the butter and then tucked in among the endives. Salt and pepper. A half a cup or so of chicken broth is swirled in the pan to catch the fried bits, then poured over the endives. Foil is crimped tight over the pan and the endives braise at 350 or so. When they are very tender, remove the foil and let cook til browned and liquid is reduced. Then pour a half cup of heavy cream over them and put back in the oven without a cover and cook til the cream is mostly absorbed. Oh my god, what a fabulous dish.

I also made the crispy potatoes from the last issue of what has become maybe my favorite cooking magazine -- Fine Cooking. Boiled new potatoes (I braised mine in the oven in broth with garlic instead), are flattened on a baking sheet, drizzled with oil and salt and pepper and roasted until they crisp up. I think they come out like very adult tater tots. Really delicious.

And for color (because so far this is an awfully brown meal) I roasted carrots, parsnips and onions (separately) at 400 degrees in olive oil with salt and pepper. When each vegetable was shriveled and caramelized, I added it to the serving dish. Checked for salt, drizzled some balsamic vinegar over all and voila, vegetables that taste like candy. Yum.

Bon voyage! Looking forward to reading about your Paris trip. What a nice way to spend Valentine's Day.

I didn't know you were supposed to boil the meat before browning. I'll have to try that. Anyway, what Lydia said...Bon Voyage! I just finished reading Without Reservations and the author has a magical time in Paris--I need to return. But in the meantime, I can't wait to read about your culinary adventures!

Paris sounds like a great place to spend Valentine's Day (or any day for that matter!) I do agree, Fine Cooking has absolutely become my favorite magazine. Every single recipe I've made from it has been a keeper.

Do check out the best hot cocoa ever made while in Paris. It's on the Rue de Rivoli, across the street from the Tuleries, I think closer to the Champs Elysee side than the Louvre side. Drat, what was that place called?!?! I think it was "Angelina's Tea Room". It's a few storefronts toward the Champs Elysee from the Hotel Brighton (where we stayed). Order the $5.00 cocoa--and never regret it! Oh, I still dream about that stuff...

christine, you probably won't get this until after you return to the states (especially not knowing about the internet connection), but i hope you have a glorious, romantic, wonderful valentine's day in paris. how brilliantly romantic...

Paris and V-Day...what a beautiful combination! I hope you have a lovely, romantic and restful time.

Have an abundantly romantic Valentine's Day trip. And thanks for making me so hungry with this amzaing post! I'm getting ideas! :)

Lisa, I don't know if you have to boil the meat, but I think it's a precaution if you plan to braise for hours at 200 degrees.

Kalyn -- great recipes, and great photos too. Gourmet's have gotten a little gloomy of late.

I'll try to check it out, Robyn, thanks!

Thanks, Melissa. Pretty glorious so far!

Thanks, Kristen. It's drizzly rain here, but romantic all the same.

This post makes you hungry, Kevin? Good! Turn about is fair play!