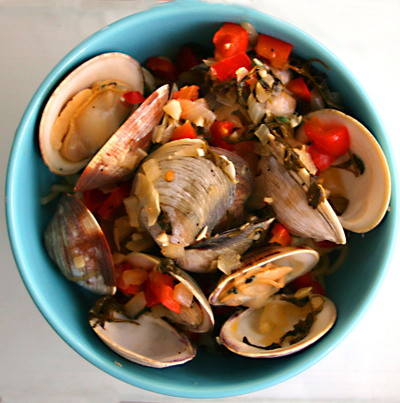 Lovely day in Apalachicola.  Worked all morning and spent the afternoon on the BEACH! For a girl who grew up near the water, living most of the time in landlocked Indiana comes  with a considerable psychic cost. Walking on the hot sand, floating in the Gulf, and listening to the waves hit the shore is bliss.

On the way back we stopped at a seafood house in Eastpoint. We were looking for some smoked fish but they didn’t have any, so we decided to buy some mullet and grouper and smoke it ourselves. Of course, we don’t have a smoker, so that was the next stop and by then it was pretty late so we’re saving that food adventure for tomorrow.

Meanwhile, the shop had some Alligator Point clams, which Jer loves (me, not so much.) So I made them for his dinner – borrowing loosely from a recipe from epicurious for steamed clams with red pepper and cilantro. You can visit epicurious here for the precise recipe, if you cook that way. In this case, precision doesn’t matter too much. I melted some butter in a deep pot, sautéed ½ onion, chopped, and a couple of garlic cloves, chopped, and a red pepper, also chopped. Added some hot red pepper flakes and a handful of cilantro and about 2 cups of white wine, some salt and pepper. When it had had time to meld a little, I added a dozen clams, scrubbed. Clamped the lid on and let them steam about 10 minutes til they popped open. Served the clams and their spicy, fragrant, brothy broth on spaghetti. The whole house smelled wonderful, and Jer was a happy boy.

I'm loving the daily report from Apalachicola. Looking forward to reading about the smoking adventure.

Good is not the word for this dish.

Delicious is not the word for this dish.

I second that. Make mine without the pasta, I prefer to soak it all up with bread.

Now I'm itching to go to the beach, but
the weather in the Northeast is still too cool. Steaming up a pot of these is the perfect compensation.

This meal means to me ,summer !! Nice photo.Congratulations !!!!

Lydia, it IS perfect beach food because we were able to come right home from the beach and eat. It only took about 15 minutes to prepare, once we picked up the clams.

Ronnie, the smoking adventure continues. The smoked mullet dip we made is better than the grouper dip!!!!

Come on down, Ellie!

You too, Mary. And you are right -- the broth is the best part.

Should be warming up there pretty soon, though, Susan, no?

No, Bea, nothing better, and it's something we really miss in Indiana.

I've never been wild about them, Cynthia, but I think I'll have to reconsider. These smelled incredible.