Dinner by the River Sitting in the Bangkok airport, WAY too early for our flight to Hanoi. They won't even let us check in for another hour and a half and the business lounge is located on the far side of security. So, to entertain myself I can count all the bug bites on my legs that are starting to itch, or blog last night's dinner. Blogging it is!

We ate at the hotel's gorgeous Thai restaurant, Thara Thong -- all dark polished wood and soft colorful cushions on the floor. Had we sat inside, perhaps I'd have fewer bug bites to count today.

But, the outside was beyond lovely, and worth a scratch or two (or 24.) The patio is alongside the Chao Phraya river and the air was like the softest whisper on our skin. The lights played across the water, and it was gorgeous and peaceful, barring the occasional discordant note (like the live Thai band blaring out a heavily accented version of "YMCA" on a floating dinner cruise while dozens of tipsy diners bopped around and managed not to fall overboard.). One of the many good things about dining riverside is that those discordant notes, when they appear, float right on by.

The food was classic Thai, beautifully, if a tad too cautiously prepared. Possibly that was my fault, as the memory of having my head explode with the heat of the afternoon's Som Tom was still fresh in my mind, and I asked for medium spicy.

But our first course, Mieng Kam, was spectacular. Simple, but perfect. It's an array of ingredients in tiny dishes -- peanuts, thin-skinned lime chopped fine, ginger, shallot, dried shrimp and toasted coconut. You take a tiny bit of each and roll them up in a cha-plu leaf with some dark sauce, sweet and savory, that seemed to have tamarind in it, though I wouldn't swear to it. Wrap the whole thing up and pop it into your mouth at once.

It's a mouthful of Thailand. Sweet, sour, tart, salty, every good and amazing flavor exploding in your mouth with crunch and texture. I've had a version of this in the States, but usually with lettuce -- never with an actual cha-plu leaf that adds an herby, chewy bite to the thing. It's brilliant. Just brilliant.

Which made it okay that the Som Tom was a little flat, both chili-wise and lime-wise. Good but missing the magic.

The other salad we had was amazing, though. I wish I had better pictures but it was so dark out there the menus came with little lamps clipped on to them. It was stunning: a pomelo (a green, sweet grapefruit type of citrus), shredded up so that the little cells of juice stayed whole, mixed with coconut and chilies, stuffed back into the rind and topped with prawns. What a fabulous combination of sour, sweet, and savory. But that's what's so great about Thai food.

After that we were pretty full. Jer had stir fried prawns with black pepper which were great and I had fried corn cakes, mostly because I make them often at home and wanted to see how theirs were. (In a nutshell, they were better. Fatter, crispier, and cornier. Back to the drawing board.)

I finished with coconut ice cream with fruit salad and Jerry had an egg custard in a pumpkin shell that sounds odd, but think pumpkin pie.

And because we were staying right there in the hotel, all we had to do was stumble upstairs to our room. I didn't even notice the bug bites til morning. 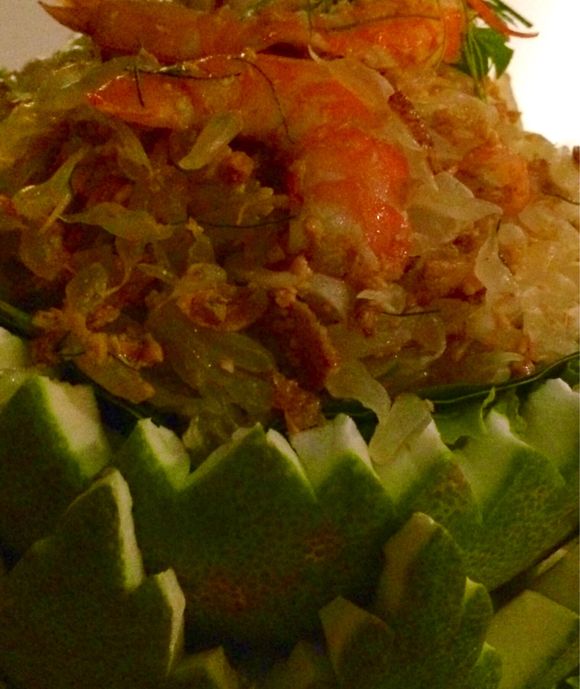 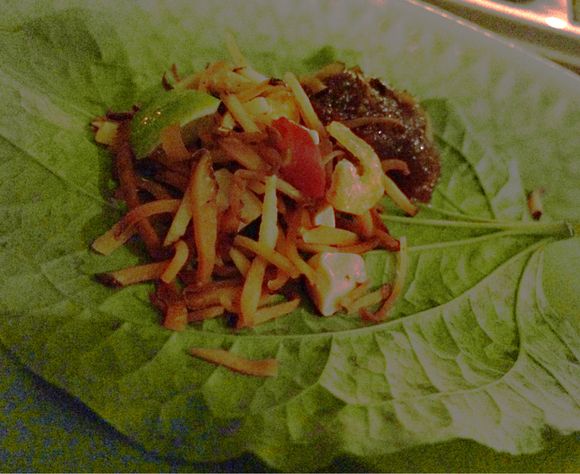 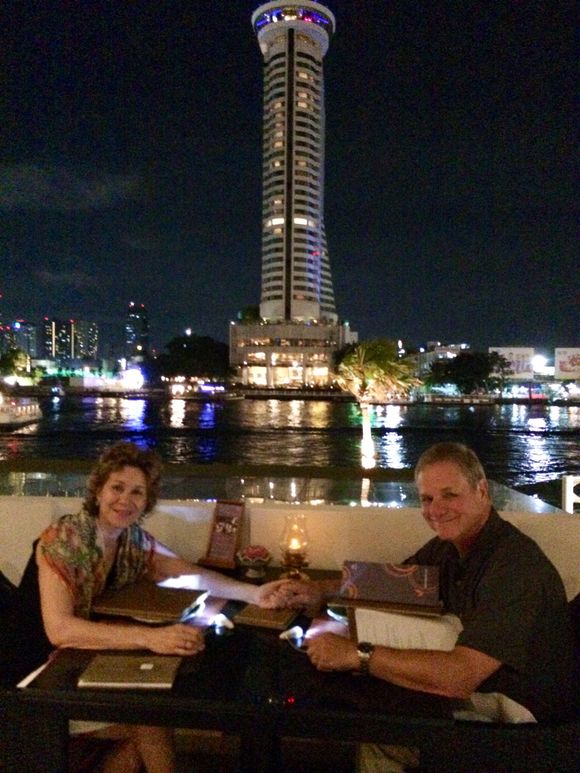 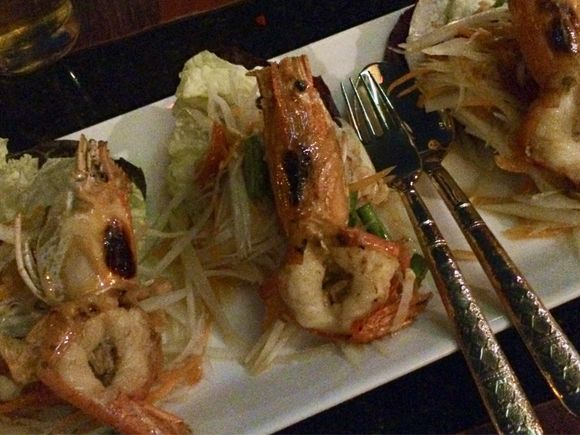 What a lovely picture of the two of you! Thanks for sharing your adventures through the Orient. You are making even this homebody yearn for a bit of the exotic!

Be sure and dance all the calories off!

Thank you for sharing your travels with the rest of us. The food and view look fabulous.....and you two don't look too shabby either! .....LOL You both look like you are in 'Heaven' and I can't think of anyone as deserving as you two. Enjoy and keep posting and enjoy your trip.